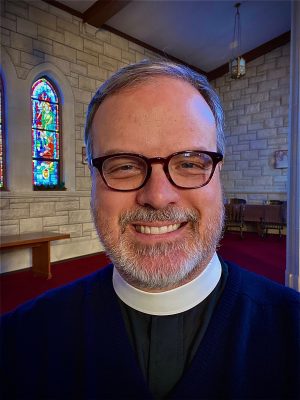 The Fifth Sunday after Pentecost

I met a man in a coffee shop the other day.
I was in my clerical collar.
He referenced the collar;
I made my usual joke about “kills fleas and ticks for up to six months.”
He said, “Jesus is cool. He’s a good teacher.
He has a strong moral perspective. But the miracles make it hard to believe.”
I said, “To me, belief is the whole point of the miracles.
You see what Jesus does, and it backs up what he says and who he is.”
I mentioned how in the Gospel of John,
Jesus says, “If you don’t believe me, at least believe in my works.”

And although I felt I represented the church reasonably well,
Still, the doubt is understandable. You don’t actually have to ignore it.
It won’t make you less of a person. It won’t make God love you less.
I don’t ignore my doubts. Sometimes we have long talks.
I’ve learned that you can be a person of doubt and still believe,
That those aren’t mutually exclusive;
At this point in my journey, nothing seems more natural.
Did I remember to say this to the person in the coffee shop? If I didn’t, I should have.
People of strong faith often have strong doubts.

In fact, one of the great mystics of the church, Meister Eckhart,
Defined faith as the act of constantly having conversation with our doubts.
I say all this because I’m not sure people always know what to do
With these stories in the gospels about miraculous healing — and there are many of them.
There is no one right answer, but I do know this:
They are part of the lore of our faith, and they stand to help us love God all the more,
So we do have the responsibility to seriously engage them.

Mark means for us to deliberately put these two stories into discussion with each other:
To better understand their similarities and their differences,
So we can better comprehend this thing Jesus calls the Kingdom of God.
When we do this, what do we find?

We find, first of all, that those who receive healing
Lead very different lives, and that’s no accident.

The child who is brought back from the brink is twelve years old.
Her whole life up to now has been her family enjoying a strong position in society,
Probably not having to think too much about basic necessities.
Her father Jairus is a respected person of influence and means.
He has prominence in the local synagogue.
He has servants and his own home.

By comparison, the bleeding woman has gone twelve years without healing.
She has suffered the entire time the girl has been alive so far. Consider her desperation.
We are told the woman has “endured much under many physicians,” and only become poorer:
Multiple diagnoses, no solutions, no improvement, regression, a worsening state.
If she has endured much, then she has also spent much, already starting out poor,
And is probably well beyond the edge of her own financial resources.
Added to this, because of her chronic bleeding and risk of infection,
She was long ago labeled ritually impure,
And that means she’s been an outcast this whole time.
So: broke, sick, socially untouchable, and with no other prospects,
She decides to make a last-ditch effort.

But before she does, let’s just consider for a moment
What Mark may be building to here.
In this story about the healing power of Jesus,
The top and the bottom of that society have come together
Around Jesus for their most common requirements.
We all have basic needs for health.
There has been a collision here, a jamming-together of societal opposites in God’s name.
It is unmistakable.
It tells me that whoever Jesus is and whatever else he may be up to,
A big part of his mission is to bring the world to him: not just one kind of person,
But specifically and materially any and all who would come are welcome.
There is no one “right kind of person” to receive the miracle of Christ and the love of God;
All deserve to have life, and have it abundantly.

So when the woman takes her chance and touches Jesus’ cloak,
And Jesus asks her about it, and she makes her public confession,
And he pronounces her healed –
When these things happen, all the elements of society, from bottom to top,
Are witness to these things.
Specifically, one Jairus –
The one whose daughter is sick unto death,
The one for whom the clock is definitely ticking down the minutes.
The verse at the end of that first paragraph definitively tells us so:
Jairus and Jesus are traveling together; Jairus is there; he’s seeing the whole thing.

Like any good father, he must be filled with dread: “Can we get home fast enough?”
And then this … situation with the woman touching Jesus’ cloak.
“Who has time for this?”
“My circumstance is far more dire.”
“This woman has been sick as long as anyone can remember.
Let’s hurry on to my house, please, before it’s too late” ….

Have you ever noticed that Jesus seems to run on his own clock?
Yes, of course, he takes time every day for prayer,
But I mean a rhythm that just generally
Goes slower and takes individuals into account.
When the authorities bring him a woman scandalized by adultery
And they want to stone her to death,
Before telling them not to cast the first stone, which he will get around to doing,
He just bends down and draws in the dirt for a minute.
He goes on long trips, far-flung walking journeys,
And then only talks to one or two people once he gets there.
And when reports of the death of Lazarus reach him,
He waits until he knows that Lazarus is well and truly dead
Until he comes to the grave – at first to mourn, and then to raise Lazarus to life.

I imagine Jairus may have been thinking that the clock was against them,
But only Jesus truly understood in that moment what was really at risk.

So when he tells the woman to “Go in peace,”
I can see him casting a quick look over at Jairus.
And when he returns his attention to Jairus and says, “Do not fear, only believe” –
I can see him also looking at us, the readers of Mark.
“Jairus, you just witnessed the miraculous. A woman was restored to life and society.
Can you trust me? Can you live without fear? Can you live in peace?”

This, to me, is the final word.
The raising to life of the little girl only further stresses the point:
We can live in peace, assured of God’s love for us, or we can live in fear.

It is our free choice.

Which brings me back to the coffee shop and the clerical collar
And the conversation about miracles.

I’ve had a few days to think about it now.

Would I have said or done anything differently?
In other words, is Jesus trying to tell us anything through these healing stories
About how to live with him in our hearts?
Well, yes, he is.
And yes, I would have gone through that interaction in a different way.

First, I would have mentally set aside any other distractions
And just tried to be present with the person.
I would have forgotten what time it was, or where I had to be next.

Then, instead of worrying about how to be right,
I would have asked the person about his experiences.
Not because I subtly want him on my side,
But because we’re supposed to be decent to each other.
With trust between us, perhaps I would have felt free to share from my own experiences.
After all, you do see firsthand some miraculous healings in this business –
And frankly, I can’t deny, even in my own body,
The healing power that God has given us through science.

I might still have quoted from John –
“If you can’t believe in me, believe in the works that I perform” –
But I would have also acknowledged that belief is tenuous, and doubt is natural …
But that what God longs for is to be loved by us as God loves us already –
And that that is very different than being forced a bill of religious goods.

Finally, I would have invited him to have coffee some time, continue the conversation.
And even though our souls can be timid,
I would have told him about the warm and generous people of Grace Cathedral:
Not to make another Episcopalian,
But because it’s true, and we all need healing,
I believe this is a place where healing can be found.

Holy Communion (Rite I) – Spoken
Masks are encouraged due to high COVID numbers at this time.

Holy Communion (Rite II) – Music and Hymns
Masks are encouraged due to high COVID numbers at this time.
Childcare provided